If you missed our first two posts on “The Major Scale” and “Intervals“, it might be a good idea to catch up before we get started on chords.

Generally speaking, a chord is when three or more different pitches sound at the same time. The chords we commonly use are based on scales, which brings us back to our first post in the series.

If we look at the C major scale and play simultaneously the first, the third and the fifth note of the scale, what we get is a C major chord. More precisely, we would call it a “C major triad” because it consists of three notes.

Let us do the same thing, now starting on the second note of the C major scale – D. Going up the scale once again from D (which we now consider the first note), we add the third note F and the fifth note A. This gives us a “D minor” chord, or D minor triad.  It’s “D” because that’s our first or ‘root’ note, but why is it minor this time?

To explain, we will compare the C major triad with the D minor triad. The interval between the notes of C major are:

In the D minor chord the intervals between the notes are:

This makes an enormous difference. If the lower interval is a major third, it produces a major chord. If it is a minor third, we get a minor chord.

Notice that the distance between the lowest and highest notes remains the same: C to G is a perfect fifth (7 half tones / 7 frets), as is D to A. It is the middle note that gives the essential information which distinguishes a major from a minor triad.

If we apply this pattern along the C major scale, what we get are chords which are close ‘family members’ within C major. Starting at E, skip a note to add a G, and skip a note again to get a B.

E, G and B form the E minor triad. Here is a list of all triads across the C Major scale:

Fun fact; you can switch the order of the notes of a chord from low to high to high to low. For example in C major you can put the C on top so that E becomes the lowest note and the G is in the middle. This is called “inversion”, in which we’ll go into greater depth later.

Also, in addition to notes 1, 3 and 5 you can create much “bigger” sounding chords by continuing with notes 7, 9, 11 and 13 until all notes of the scale are used. This will also take subject of one of our lectures to come, but for now..

How to play Chords on the Guitar

If you haven’t read our blog #2 on intervals you may wish to be reminded of how a guitar is tuned: it is strung in perfect fourths except for between G and B. Let us play a few common chords on the guitar and have a look at how the notes of that chord are arranged on the guitar strings, starting with C major:

We need the notes C, E and G. The C should be the lowest. Playing it on the low E string would bring us to the eighth fret, so let’s place it on the A string, third fret. We get an E from the second fret on the D string. The next string is G, which we can handily play using the open G string. The B string can be raised a half tone to C on the first fret. Finally, we add the open E string. So from low to high:

If you play these notes, lowest first going up and sing along their names you will quickly get familiar with the way we play chords on guitar.

Now look at D minor for which we need the notes D, F, and A. Like in C major we have to find a good way for D to be the lowest note, so start with the open D string and omit the E and A strings entirely. From D, the next string up is G, which we raise to A on the second fret. The B string is raised to another D on the third fret and the high E string is raised to the F on the first fret. The chord we get is composed of the following:

For this example, we can use all six strings because the lowest open string serves as our bass note E. Raise the A string to B on the second fret and the D string to E using also the second fret. The remaining open strings all belong to E minor: G, B and E.

Notice that the note E appears three times and the note B appears twice. 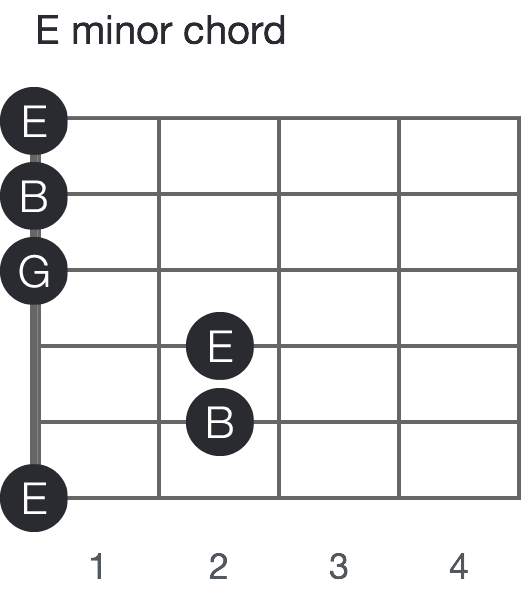 The next and most important part to learning chords is practicing them. For advice on where to start, we recommend reading “5 tips for learning guitar chords” and if you’re a complete beginner “Learn Guitar Chords” is a guide that shows you exactly how and what to practice first.

Practice These Exercises to Get Started

We also put together some exercises in our app using chord progressions that will remind you of some famous songs. You can download our free guitar chord training app to practice these exercises and get closer to mastering all of these chords and more. 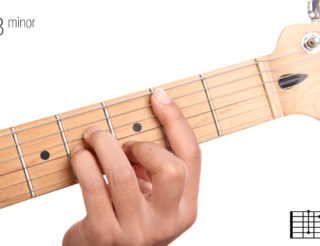 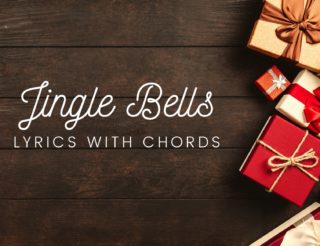 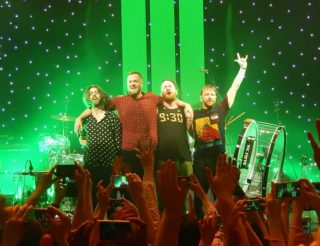 Very well explained, abot the chords. You make the complicated seem simle, thank so much!!!