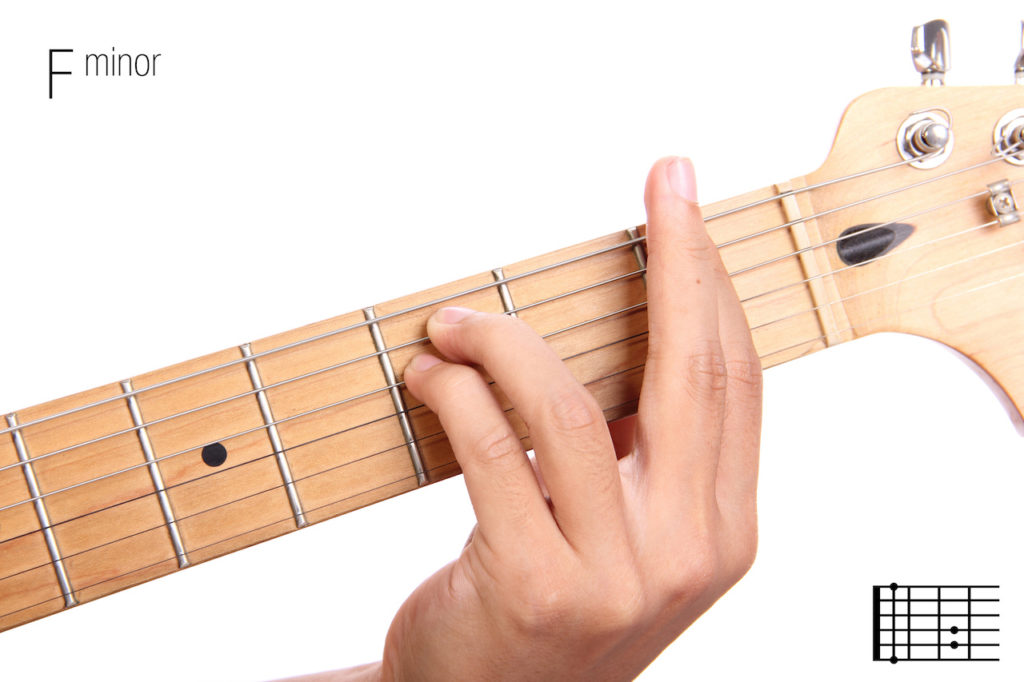 Drama queen F minor makes all the other minor keys look like fluffy pink bunnies. If they’re sad, F minor is grief-stricken. If they whine, F minor is howling in agony. If they’re ready to lay aside the blues, stand up, and get on with life, F minor is ready to lie down and die of misery. 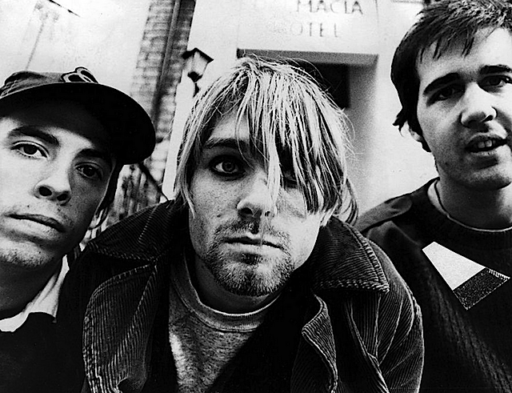 Which may be why, aside from a few notable exceptions, this key is rarely heard in jazz or popular music.

It is, however, quite common among classical pieces, particularly those involving lament, agony, passion, and hopelessness. Have a listen to Beethoven’s Appassionata Sonata or Haydn’s 49th symphony, La Passione, and you’ll have an idea of how death and crucifixion are among F minor’s fave subjects.

It’s thus appropriate that so many of the songs of Nirvana, the grunge band that enjoyed colossal fame with only three albums before its tragic end in 1994, are written in F minor.

To dig deeper into minor scales and how they work, read this.

The F Minor Chord Position on the Guitar

The key of F minor and the guitar chords required of it may be easy for some but hard for others, depending on the guitar’s action as well as finger strength and dexterity. But improvement is always an option! Letting our free Uberchord app (click for free download) listen to your playing and show you your progress can do wonders to push you forward!

Theory and Practice: The Pattern of the F Minor Scale Explained

If you haven’t been following this series so far, you should take some time now to review the differences between a major scale and a minor scale.

Below is the F minor scale, with F at its root and another F, an octave higher, at its highest point. Try sounding it out on your guitar by playing the tablature below the scale.

You can play— and later improvise— more easily if you commit the notes on your guitar’s fretboard to memory. Here is a secret technique used by many pro guitarists around the world to learn the fretboard.

Recently we introduced you to harmonic minor keys, like the natural minors (the minor keys we’ve been studying so far) except that the seventh note is raised a half tone. In the key of F minor, this would raise the Eb to an E.

We’ve also shown you melodic minor keys, which raise the sixth and seventh notes of the scale but only when ascending. When descending, the melodic minor scale is exactly the same as the natural minor scale.

Chords in the Key of F Minor

It’s important to understand that not only are the sequences of tones different in minor keys, the chord patterns differ also, and the chords don’t follow the same pattern as the tones. In all minor keys (even the melodic, and harmonic) the chord sequence goes like this:

The F minor chord, which forms the root of the F minor scale, is made up of the notes F, Ab, and C— the first, third, and fifth notes of the key of F minor. On the guitar, using the F minor chord shape shown in the diagram, these notes arrive in this order: F, C, F, Ab, C, F.

Because the basic F minor chord has no open strings, it’s not very resonant, but it is versatile. As we mentioned, you can play this same chord position all the way up the neck like you can with the F major chord position, forming a minor chord wherever you might want one.

All of this talk depends on music theory. Studying music theory will make you a better musician and let you hold your head up when other musicians sound off. Besides, it’s fun! Our blog has a helpful set of music theory articles to get you going in the right direction.

Chords in the Key of F minor

If you were to use every chord in the key of F minor, these would be the chords you’d use:

The F, Bb, and C chords are minor because in the natural minor scale (unlike the major scale) the chords at the first, fourth, and fifth positions of the key are minor.

The G is a diminished chord because in the key of F minor it sits in second place, and in minor keys second place chords are always diminished.

As in the major keys, the fifth chord— C minor in this case— can also be played as a Cm7. Because it sits at fifth place, it has the honour of being the chord announcing the ending of the chord progression, if not the end of the song itself, and is generally followed by the root chord (F minor).

Adding the seventh note of the key of C minor (Bb) to the C minor chord, creating a Cm7, makes the chord sound like it’s moving the action ahead, pushing on to the root chord (F minor) that often follows.

The seventh note in a scale is called a leading tone because of the way it leads us to the tonic, or root note of the scale, so it’s a great note to add to a fifth chord to “push the action forward.” If you want to better understand 7th chords and how to use them, check out this article on our blog. And if you want to know more about chord progressions, read this article series.

Sharpen your musical skills by playing around with the progressions below, habituating your ear to the ways in which these chords, depending on their order and context, create the sounds of beginning, rising, falling, and ending.

To repeat, here are the chords in the key of F minor: F minor, G diminished, Ab major, Bb minor, C minor, Db major, and Eb major. But throwing them all together in a pile won’t sound like music; chords need to come in an order that’s pleasing to the ear.

And so we have chord progressions.

Repeat this progression a few times. Do you hear how even in this short progression the music has a clear beginning, middle, and end, especially if you use Bm7?

Now try this, counting out four beats with every chord:

Now try playing through the following progressions, listening for the musical “messages” they might carry. Note which progressions sound finished and which ones leave you on an edge, especially if they end with Cm7. How long you play each chord is entirely your choice.

Minor chords are typed with an “m,” diminished with a “dim,” and all other chords are major.

Just A Few Great Songs in the Key of F Minor

For reasons mentioned earlier, we have little choice this week but to feature Nirvana for our songs of the week.

F minor can be the perfect key for Adele’s hymn of regret, “Hello”.

It can be a Nirvana’s discontented child’s rant, like “Sliver.”

The F minor frontier is wide open— because so few are using it! Are you ready for the challenge?

music.stackexchange.com/questions/9798/the-differences-between-natural-harmonic-and-melodic-minors
pianoscales.org/songs-by-key.html
Rita Steblin (1996) A History of Key Characteristics in the Eighteenth and Early
Nineteenth Centuries, University of Rochester Press, p. 123
Emotions of the Musical Keys
The 10 Most Used Chord Progressions in Pop and Rock and Roll 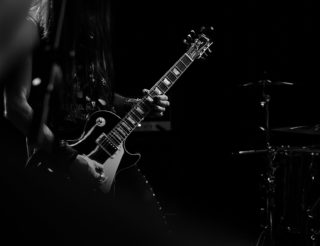 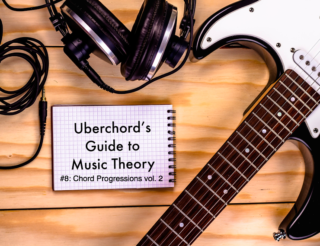