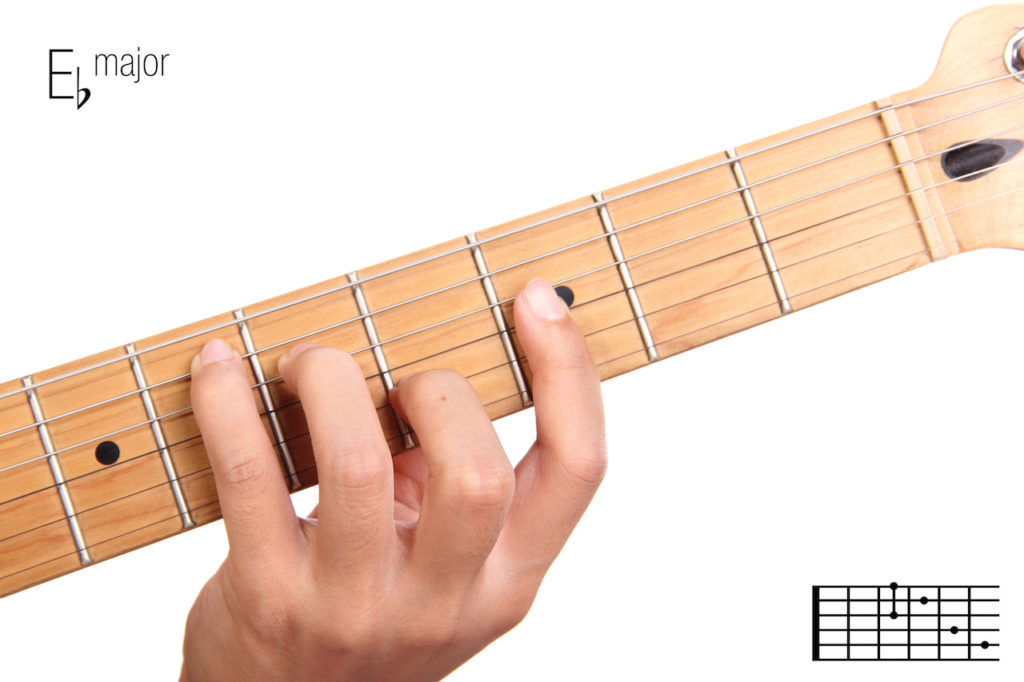 Welcome to a new episode in our “Chord of the Week” series, where we share a new guitar chord, explore its history and relevance, talk about how it’s played on the guitar, and enjoy a few popular songs and chord progressions in the key of its major scale.

Today we’re bringing you the D# / Eb chord and the key of D sharp/E flat. This key’s majestic sound makes it a great key for songs about triumph and overcoming life’s toughest obstacles!

(Looking for an introductory explanation of about major scales and how they work? Read this.)

If you haven’t been following this series, you’re probably wondering why in the heck we’re giving this key two names, and even two different key signatures, so it looks like we’ve got some explaining to do . . .

“Some composers thought of Eb major as the key of loving devotion for God. Mozart connected the key with Freemasonry, pointing to its religious nature. Other composers thought of it as a heroic key. But don’t stop there; Eb’s singability makes it a favourite of pop and rock songwriters as well.“

Last week we introduced a new concept in music theory— enharmonic equivalents. This is a term used to describe two keys that sound exactly the same but that have different names and different key signatures.

Gustav Holst (photo below) composed his magnificent “Jupiter” section of The Planets in the key of E flat major. 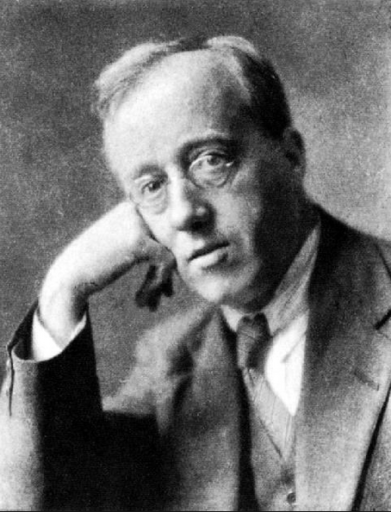 Because the Eb name and notation are the easiest and most common, this is how we’ll refer to this key for the rest of this article.

Eb is often thought of as the key of heroic bombast, and not just because Beethoven’s Eroica Symphony and Emperor Concerto were written in this key. Mozart and Richard Strauss also wrote important works in this key (Strauss’s Eb work is aptly named A Hero’s Life), and how could you get more majestically heroic than the “Jupiter” movement of Gustav Holst’s The Planets?

Richard Strauss wrote his aptly named A Hero’s Life in the key of E flat.

Some composers thought of Eb major as the key of loving devotion for God. Mozart connected the key with Freemasonry, pointing to its religious nature.

But don’t stop there. Eb’s singability makes it a favourite of pop and rock songwriters as well.

The Eb Major Chord Position on the Guitar: Bar or Capo— Your Choice

Look carefully at the above diagram and you’ll see the basic D chord shape in it. This is because Eb— and the chord built on it— is just one half tone above D. This may not seem like such a big deal until you realise that to play a song in the key of Eb you can either play the above chord or just put on a capo at the first fret and play D chord formations!

If you want to tackle this chord as it is in its basic bar chord form, we’re 100% behind you! Any chord can be played if you practise it long enough, and our Uberchord app can shorten the duration of practice needed by letting you know exactly what you can do to improve your sound.

Later on, when you find yourself having to play progressions of chords that are hard to move back and forth between, you can program in the progressions themselves and get helpful feedback. (See our blog for five great tips on how to learn new chords more easily.)

Theory and Practice: The Pattern of the Eb Major Scale Explained

Voilà— the Eb major scale, with Eb at its root and another Eb, an octave higher, at its pinnacle.

(By the way, playing scales on your guitar is a whole lot easier after you memorise your guitar’s fretboard notes. Get started by reading this.)

The Eb major chord, which forms the root of the Eb major scale, is made up of the notes Eb, G, and Bb— the first, third, and fifth notes of the key of Eb major. On the guitar, using the basic Eb chord position shown in the diagram above, these notes arrive in this order: Mute, Eb, G, Bb, Eb, G.

(If you’d like to get a more secure feel for the theory behind the practice of music making, our blog has a helpful set of music theory articles. Knowing music theory will help you to be a better musician and give you the peace of mind that comes with knowing what it all means.)

Chords and Common Chord Progressions in the Key of Eb Major

If you were to use every chord in the key of Eb major, the following would be the chords you’d use. You aren’t strictly limited to using only the chords in the same key, but it helps to know them, so here they are:

Why are the F, G, and C chords minor? Because in the major scale the chords at the second, third, and sixth positions of the key are minor.

Why is the D a diminished chord? Because in the key of Eb major it sits in the seventh place, and in major keys all seventh place chords are diminished.

Check out the following progression:

For variety and greater expressiveness, in the key of Eb major the Bb chord can also be played as a Bb7. Because it sits at the fifth position of the key of Eb major, it has the honour of being the chord that announces the ending of the musical phrase. Adding the seventh note of the key of Bb (Ab) to the Bb chord, creating an Bb7, makes the Bb chord sound a little more like it’s leading back to the root chord (Eb) that usually comes next, or, in cases where no chord comes next, gives the musical phrase an unresolved sound.

So let’s have another look at the chords in the key of E flat major: Eb, F minor, G minor, Ab, Bb, C minor, and D diminished.

By far the most common chord progression for folk, classical, jazz standards, country, and pop songs is (loosely) this: I, IV, V, I (that is, on the first, fourth, and fifth chords in each key, major or minor).

The following are a few more chord progressions, with those same progressions in Eb listed below. Most of the songs you hear are composed of different combinations of these chord progressions. In addition to your Uberchord lessons, take a little time to play around with the progressions below to become more familiar with how these chords, depending on their order and context, create a sense of beginning, rising, falling, and ending.

Just A Few Great Songs in the Key of Eb Major

In your musical studies you may have remarked that each key— and even each chord— that you play has its own personality. The key of Eb major, for example, shines with visions of glory. It’s also great for voice because it falls easily within most vocal ranges. It’s all about getting lifted up! What’s not to love?

Adele – Rolling in the Deep

Foster The People – Pumped Up Kicks

Survivor – Eye of the Tiger

Guns & Roses – Welcome to the Jungle

Keeping the key and chords of Eb major in your guitar arsenal means you’ll always be ready to push for and achieve that elusive musical victory!

Rita Steblin (1996) A History of Key Characteristics in the Eighteenth and Early
Nineteenth Centuries, University of Rochester Press, p. 123
D. Mar (1981). Anatomy of the Orchestra, University of California Press, p. 349
Emotions of the Musical Keys
The 10 Most Used Chord Progressions in Pop and Rock and Roll
Song Key Finder

I think this is very helpful…

Thanks, Roderick! It’s great to know we’re helping you. Please let us know if you have any suggestions for topics that might be helpful to you and other guitarists.