Your wife has just left you for your best friend, and you’ve just been thrown in jail. Filled with shame and sadness, you pray for forgiveness.

Then you reach into your pocket and pull out a blues harp and start playing “Folsom Prison Blues.” But the blues harp can only play in one key. Which key will it be?

You’ll play the song in C sharp minor, and you’ll use the C#m guitar chord. This is because C sharp minor sums up the pain of lost love, lost friendship, lost freedom, and guilt better than any other key.

What Do You Call It?

C sharp and D-flat are enharmonic equivalents, which means that even if the name and the key signature are different, they refer to the same series of tones. Composers usually choose the key that has the least number of accidentals, as this makes a piece easier to write and play. The unused key is thus referred to as a theoretical key, which is to say that it exists more in theory than in practice.

And what is it that dooms D-flat minor to the status of a “theoretical key?” The fact that it has eight flats! When a key has eight flats and a scale only has seven notes, what does this mean for the key signature? It means that not only every note in the scale gets flattened, but also that one of the notes (B in this case), gets two flats. Seriously, who needs that kind of complication?

So this week we’ll be referring to the chord and scale of the enharmonic duo C-sharp minor and D-flat minor as simply C-sharp minor, which at four sharps is considerably less of a headache to write and play. We’ll take a trip through C-sharp minor’s history, look at the basic chord shapes, and play some C-sharp minor songs.

Not So Popular With the Classical Musicians, But Surprisingly Common in Pop, Rock, and Indie

Four sharps isn’t a lot for a seasoned classical composer to handle, so it’s a wonder that we don’t find C-sharp minor among many classical works.

The key is surprisingly more common in pop, rock, and indie songs.

The C#m Guitar Chord Position on the Guitar: The Basic B Minor Chord Shape, Two Frets Up

The C#m guitar chord uses the chord shape for B minor, just pushing it up two frets (there are two half tones, thus two frets, between B and C#). It’s relatively easy to play and gives a nice sound. You can either play it as a bar chord or just hold down the top four strings. Either way you can play this chord shape up the neck to make more minor chords.

If you want a higher sound, the basic G minor chord position at the ninth fret also makes a C# minor chord. As you experiment, be sure to use your Uberchord app to help you improve your tone and timing and to try out new rhythms and strumming techniques.

(If you have a hard time learning new chords, this article gives you five great tips.)

Theory and Practice: The Pattern of the C Sharp Minor Scale Explained

This is two octaves of the C-sharp minor scale, ascending and descending, with a C# at its root, another C# halfway up, and yet another C# at its peak.

The basic C#m guitar chord, which forms the root of the C# minor scale, contains the notes C#, E, and G#— the first, third, and fifth notes of the key of C-sharp minor. On the guitar, using the basic C# minor chord position shown in the diagram above, these notes arrive in this order: Mute, C#, G#, C#, E, and G#.

If you want to use every chord in the key of C-sharp minor, here they are (all chords major unless stated otherwise):

“Shape of You,” by Ed Sheeran (same chord progression repeated for verse and chorus)

Songs in the Key of C Sharp Minor: Sad, Sorry, and Solitary

Poor C-sharp minor has lost everything, or is about to, and blames itself. We’re sure you know the feeling. You too can play and write songs in this key, expressing your deepest sorrow, just like the following people did:

Britney Spears used C-sharp minor to express shame and regret— and perhaps a wee bit of pride— regarding the way she lead along a potential lover in her song “Oops, I Did It Again.”

Maroon 5 used the C#m guitar chord in the song “Maps,” to describe the feeling of being rejected and trying to find the way back to the lost lover.

In “Message in a Bottle,” written in C-sharp minor using the C#m guitar chord, The Police pointed out that as lonely and sad as we feel, we’re never alone in our misery; at some point everyone sends out an SOS to the world.

C-sharp minor may not be the jolliest key on the block, but it deserves your attention, and it may just turn out to be the right key for your next masterpiece.

Oh, and have you downloaded the Uberchord app yet? If not, here are five great reasons why you should! 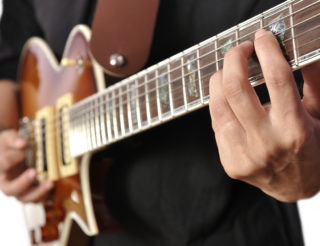 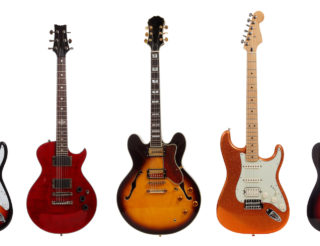 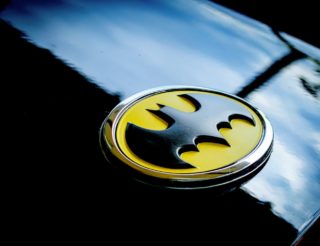